There are events that happen every now and then that seize my attention. And, they demand that I respond rightly. By rightly, I mean that I should take the time necessary to halt, soak in the event, and process it in a manner worthy of its presentation.

Here’s the story. We were on a pre-Christmas trip to Branson, Missouri. We were driving to the Branson Landing to do some shopping. Then, it caught my eye (for the record trees, rocks, the clouds, a hawk, anything of that sort tends to catch my eye). It was a tree that was strangely out of place. It wasn’t growing out of the ground; it wasn’t growing on top of a rock ledge; it was growing out of the rock ledge about 12 feet off of the ground!

So, I slowed the car, pulled off in an awkward location that would irritate other drivers, grabbed my camera, and bounded off toward the tree. I zig-zagged along the grassy roadside to the spot, and with cars whizzing by, and my family worrying about my safety and sanity, I took several photographs of it.

It appeared to be a red oak, and as I approached it, and positioned myself slightly under it, I was awestruck. It was grand. I hadn’t seen anything like this before. In the middle of a busy roadway, in a tourist town, grew an oak that was defying the rules. It was a small dose of wildness among sterile domestication; it was visually poetic. 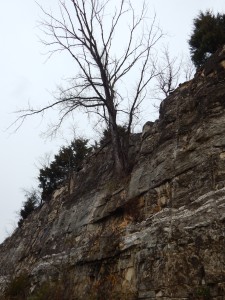 As I backed away from the tree and took several more photos something unexpected crept into the viewfinder–a road sign. 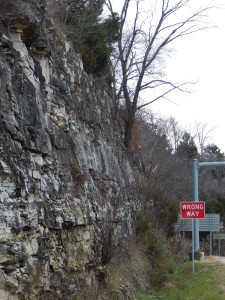 The sign was telling drivers — and a nut like me (though I prefer the term “acorn” instead of “nut”) — not to go this way. Ironically, the red oak stood as a striking contrast to the sign’s message: “WRONG WAY.” The tree was growing the “wrong way” according to common sense and the usual practice of nature. It should have been growing on the ground where its roots could anchor and spread, or in a pasture, or anywhere other than out of a crevasse in a rock ledge.

I have no idea how the acorn that became this daring oak arrived in the gash in the rock ledge. Perhaps a suicidal squirrel dropped it there as it pondered leaping off the ledge. Who knows? I do know this: the acorn did what it was supposed to do in the location that it was placed in. Hmmm. This lesson needs little, if any, elaboration.

Psalm 1:3 states that the godly man (or woman) “is like a tree planted” by streams of water, bears fruit in his/her season, has non-withering leaves, and propers. Note the verb “planted.” The trees (godly men or women) in this verse are planted. You are where you are by design.

This rock ledge-defying tree was not planted alongside a calm stream of water. We usually aren’t either. Like this tree, we are to grow where we are planted. We often have to do it against the “rules” or the expectations of those around us. But we do it. We hold on, grow, drink in the water that God gives, and by His power we bear fruit, resist withering, and prosper. Even on a ledge.

An atypical, not-so regular guy who loves his family, the outdoors, and all things involving words-- both reading and writing them. When forced to be indoors and sit still, I work in health care. And, a Christ-follower. View all posts by Joseph